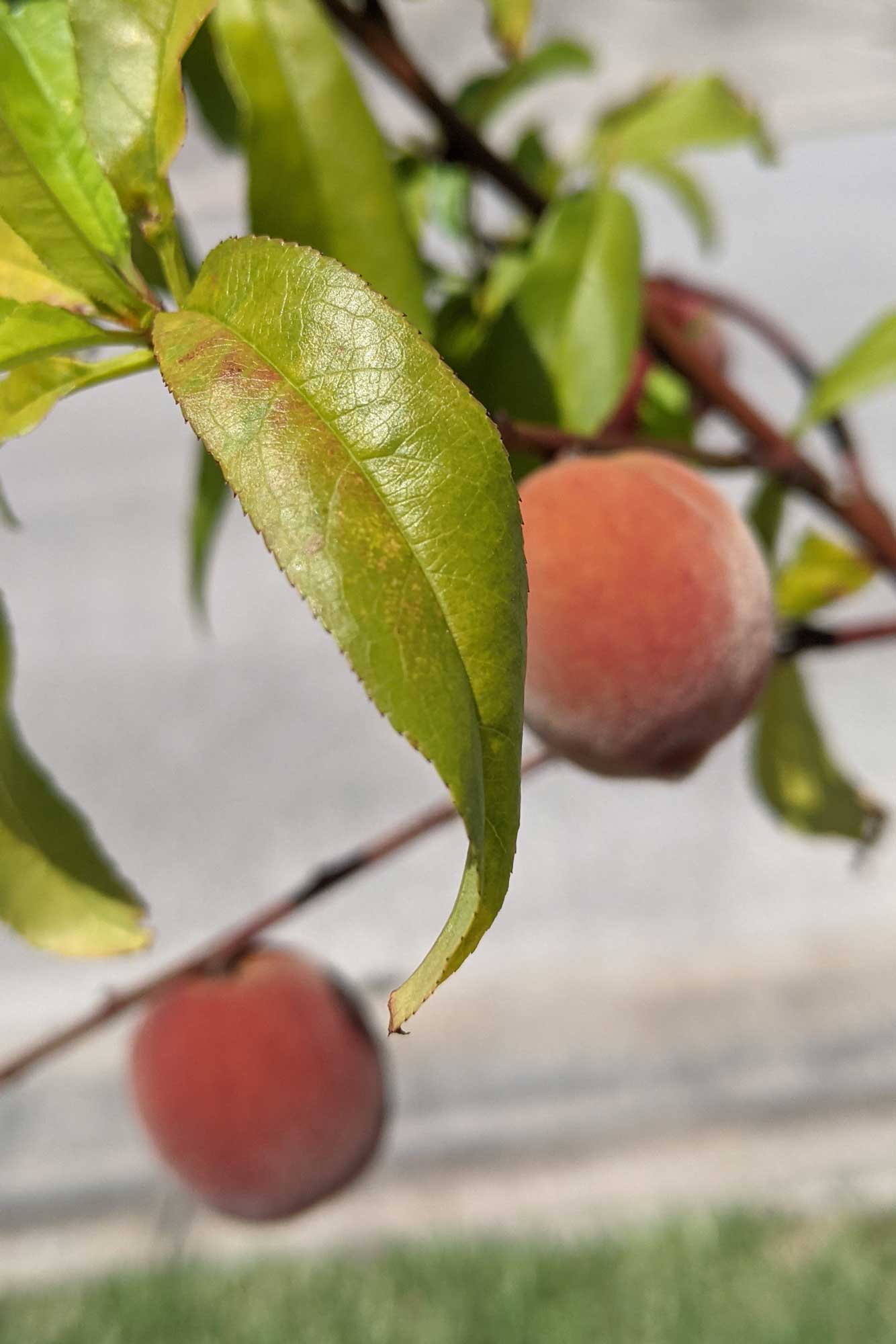 Interested in growing peach trees in Brevard County, Florida? I’m in Satellite Beach, just east of Melbourne, and we planted 3 (well, 4, story to come) peach trees just this past winter, and here’s how they’re doing this spring.

Of all the fruit trees and plants I’ve put in our yard this past year, peaches far and away get the most attention – people seem amazed that we’re able to grow peaches. And it’s ironic, because of all the trees I planted, the peaches have been the ones that seem to do the best for me, with the least amount of work.

First question: how do they do with the salty sprinkler water, that decimates mango and avocado leaves and eventually kills the trees (if it hits the leaves; larger mangos and avocados seem okay with it)? Well, I’m not 100% sure, but I think the peaches do fine. Here’s why. By the time I planted the peaches, I’d already gotten into the habit of protecting my newly-planted trees from the salty well-water with shower curtains. So the peach trees went in protected on Day 1. However, some leaves still get hit from the spray, and over time, a few of the posts holding up the shower curtains have broken. Even so, I didn’t notice any damage to the exposed leaves. So I removed the shower curtain protections from 2 of the trees, and left them on the other. I’m experimenting. But so far, so good, for those getting sprayed. Peaches for the win beachside!

All 3 of my peach trees have come from Rockledge Gardens, a nursery slightly to the north of me, between Melbourne and Cocoa. For whatever reason, it’s more difficult to find peach trees in the area than mango or avocado trees. I started with a 15-gallon Tropic Beauty, which stood about 6 or 7 feet tall when I planted it. It leafed out beautifully, and produced a ton of small peaches (well, maybe 30). I’ve learned that peaches, unlike other fruit trees, don’t naturally thin themselves as the fruits grow. So I removed all but about 10-15 of the peaches from this tree, leaving the remaining peaches at least 8″ apart. (Except two I missed right next to each other).

I picked most of these peaches too early, as they looked ripe but were not yet ripe, so we had a number of tasty but sour not-quite-ripe peaches from the Tropic Beauty. They were smaller than store peaches, but larger than the peaches on the Flordaglo (to be discussed below). Several peaches were removed from the tree by (?squirrels? ?rats?) animals, and several blew off in a strong windstorm we had as they were ripening. We ended up with about 8 peaches to try from this tree. (Tropic Beauty harvest time: mid to late April).

The last 3 had an issue though – dark rotten spots over the surface. One had them everywhere, pretty bad, and the other two just had a few on one side (the other side looked perfect). After doing some research and asking on this amazing forum, it seems that the spots were the result of a beetle that bites peaches, then waits for other bugs to come eat the tasty exposed peach, and then eats those bugs. Smart beetle.

As far as health, the Tropic Beauty has a lot of leaves with brown tips, and a lot of other healthy leaves (especially lower on the tree … it seems to keep trying to grow into a bush). I’ve read and been told that it’s probably a too-much or too-little water issue, but I’m not really sure which, so I don’t really know what to do about it. So I’m monitoring, and watching, and waiting.

Next, I planted a 7-gallon spindly Flordaglo. It’s a scrawny-looking tree, but I’ve been told that peach trees grow quickly, and I read raves about Flordaglo peaches online. So when I found one at Rockledge, I snapped it up. It also developed many small peaches, and, as with the Tropic Beauty, I thinned them for the sake of sweeter, bigger, fruit. In the end, I left about 10 peaches on this tree. The same windstorm dropped another 2.

Of the 8 remaining fruit, I picked 2 too soon, and they were slightly sweet but also tart. So I was patient. And more patient. And more patient. And a few days ago, I picked one that … finally … seemed ripe. It was small. It smelled quite peachy. It was delicious. The best peach I have ever had. Tiny but amazing. (The pit was extremely small as well, so at least the small fruit was mostly fruit). There are 5 left on the tree, and I’m being patient (having learned that it’s worth it). (Flordaglo harvest time: late April to early May).

The Flordaglo, like the Tropic Beauty, has some browning leaves. It almost seems as though the leaves brown as the fruit are in full development mode – maybe the tree needs more water at that time, so the leaves suffer for the sake of the fruit?

The last (producing, still alive) tree is a Tropic Snow. It is definitely the healthiest-looking of the trees, with almost all green leaves. However, the fruit on it hasn’t yet really begun to ripen, so I’m wondering if it’ll have the same reaction (leaf-wise) as the other two trees did when their fruit ripened. We planted it as a 15-gallon tree, already leafed-out, and it probably has 15 peaches on it at the moment. They are still green, so I don’t yet know when they will ripen, or how they will taste. More updates on them as I know more.

My fourth peach tree was an unfortunate purchase from Tractor Supply Company. They had some fruit trees, and on a whim, I bought one, a Florida King. However, I later found out that those trees don’t produce here in Brevard, needing more chill hours than we get. (Shoulda pulled out my cell phone and done 5 minutes of research before purchasing.) It did have fruit on it, probably having wintered further north, so I was going to give it a chance, and wait and see what developed. However, it was rootbound when I planted it (the main root was curled in a circle around the other roots), and while I tried to unwind the roots, I’m not sure I did a good job. The leaves browned, the tree withered, and I removed it (partly because it was failing, and partly out of some fear that it had a disease that would spread and kill all the healthy trees; in retrospect, I think it was just the same “leaves brown as fruit develops” phenomenon that I’m finding with all the trees, but it was the first to suffer that fate, so I didn’t know).

That’s the Satellite Beach peach tree journey to now. More as I have more! I’d love to hear about your peach tree adventures. Happy gardening and happy Spring everyone!

Peach Trees on the Space Coast

Talking about my experience growing peach trees on the Space Coast of Florida, Zone 9b, in Satellite Beach.

As someone who had no idea *specifically* how fruit grows on a tree before I...

The Banana River Yard's hours are: Monday, they open at 4, and have their awesome...

So Covid caused a lot of my daily activities to go by the wayside ......